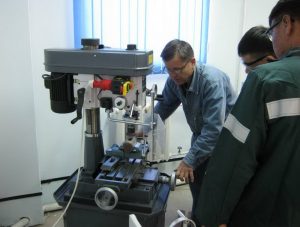 Creation of a center for independent assessment and qualification on the basis of the Association of Legal Entities «The Republican Association of Mining and Metallurgical Enterprises» (AMME).

The Republican Association of Mining and Metallurgical Enterprises (AMME) is putting efforts for creating the Center for Independent Assessment and Qualification on its own basis in the testing mode (hereinafter referred to as IAQ).

An Inter-Sectoral Working Group has been established and operates in order to coordinate the creation of IAQ by the initiative of KazEnergy Association and the AMME. The Group includes representatives of interested ministries and departments, as well as organizations and associations in order to develop common approaches to create IAQ in the sectors.

Within the framework of the institutional model of AMME developed by the Kasipkor Holding, the following measures were taken:

2) as part of a pilot project on IAQ implementation in mining and metallurgy, the qualification requirements for 15 most demanded specialties were developed for further creation of theoretical and practical certification tests tasks.

Qualification requirements for graduates of VET were developed with the participation of employers, VET system educational institutions, independent experts, and foreign consultants.

Taking into account the biggest concentration of large industrial enterprises and availability of educational infrastructure, regional development of an independent assessment of qualifications is being considered. To this end, the AMME organized trips to industrial regions of Kazakhstan in order to research the facilities of VET education institutions, which train specialists in mining and metallurgy.

Within the framework of the EU project “Support for vocational education in the Republic of Kazakhstan”, the experience of IAQ of the Kingdom of Denmark and the Federal Republic of Germany was studied. The main conclusion that has been made is that the approach adopted today in Kazakhstan is consistent with the progressive practice of these countries, where the assessment of the qualifications of specialists at all levels is carried out by employers’ associations, taking into account the sectoral focus.

According to the results of the III Congress of Mining and Metallurgy Industry of Kazakhstan held in July 2012, delegates from the industry enterprises supported the proposal for the implementation of IAQs in mining and metallurgy on the basis of AMME.

Currently, with the participation of the AMME and the Ministry of Industry and New Technologies of the Republic of Kazakhstan, draft Rules for confirming compliance and assigning qualifications to specialists in mining and metallurgy have been designed. The project is at the final stage of approval and will be approved soon. Thus, the necessary legal basis for the implementation of IAQs in the mining and metallurgy sector will be established.

On October 3, 2012, the AMME initiated the third meeting of the Sectoral Council for the development of technical and vocational education and training for mining and metallurgy at the MINT RK, during which the pilot project for introducing IAQs in mining and metallurgy was reviewed. Results of AMME on the development of requirements for 15 specialties were presented as well.

Employees of the AMME were trained by NCA LLP with the assistance of experts of the American National Standards Institute (ANSI) in ISO / IEC 17024 “Conformity assessment. General Requirements for Personnel Certifying Bodies”, which is necessary for associations to pass an accreditation procedure within the pilot project and to start the work of IAQ centers on the basis of associations.

As part of the preparatory work for the establishment of a Certification Center on the basis of the AMME (body for the assessment and confirmation of personnel compliance), a special structural unit has been created, i.e. HR-Projects Center, whose work has been brought into compliance with the requirements of ISO / IEC 17024 “Conformity Assessment. General requirements for personnel certification bodies”. Thus, after the approval of the national standard ST RK ISO / IEC 17024-2012, the AMME is technically ready to go through all necessary procedures for accreditation.