The mining and metallurgy[1] are among the most competitive and dynamically developing industries of Kazakhstan.

The Republic has 30% of world chromium ores, 25% of manganese ores and 10% of iron ores. Copper, lead and zinc account for, respectively, 10% and 13% of the world reserves. 99 of the 105 elements of Mendeleev’s table could be found in Kazakhstan, 70 of them have been explored, and more than 60 elements are involved in production.

The total number of mining and metallurgical industries’ employees at the beginning of 2018 amounted to 198.5 thousand people.

As of January 1, 2018, there are 2,064 mining enterprises, including 85 large, 79 medium and 1,900 small companies. In comparison with the previous year the total number of mining companies has increased mainly due to the greater number of small businesses engaged in the production of fabricated metal products. 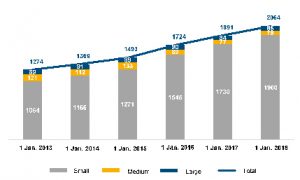 The majority of medium and large-sized extraction companies are vertically integrated companies with metal production.

According to the State Program of Industrial-Innovative Development of Kazakhstan for 2015-2019, one of the main priorities of the metallurgical industry is the modernization of existing capacities with the aim of increasing labor productivity and environmental sustainability.

At the same time, the main priorities in the ferrous metallurgy are attraction of foreign investors and implementation of investment projects for the production of high-alloy steel, traditional and integrated ferroalloys for internal needs and global steel industry; further development of the existing plants producing finished products of rolled and flat section, and metal goods.

The main priorities of the non-ferrous metallurgy are attraction of foreign investors and implementation of investment projects aimed at further expansion of production of copper, aluminum, titanium, development of new fields for the production of lead, zinc, nickel and other base metals, organization of production of finished products and products with high added value (copper pipes, copper rod, aluminum sheets, etc.), and comprehensive processing of raw materials with extraction of associated metals, including rare earth metals and rare metals.

The President of the Republic of Kazakhstan, in his State of the Nation Address of January 31, 2017, called “The Third Modernization of Kazakhstan: Global Competitiveness”, focuses on the need to expand the mineral resource base, conduct active exploration, deepen comprehensive processing of raw materials, access new markets and expand the geography of supply in the face of slowing global demand.

He also pays special attention to the need to improve labor productivity by introducing elements of the Fourth Industrial Revolution. In this regard, the President has set a big task on technological re-equipment of basic industries (including mining and metallurgy) until 2025.

Performance of the mining and metallurgy

The volume of the mining and metallurgical production in 2017 amounted to 5,831 billion tenge, which is 20.5% higher comparing with the previous year due to twofold increase in the production of non-ferrous metallurgy in 2016 and sustained dynamics in 2017. 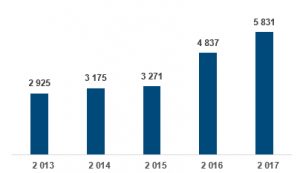 Reference. Mining and metallurgy includes such activities as mining of metal ores, mining of coal and lignite, metallurgical industry and manufacture of fabricated metal products, except machinery and equipment

The share of mining and metallurgical products in the total volume of industrial production in 2017 amounted to 28.5 %.

Dynamics of the index of physical volume in mining and metallurgy for 2011-2017:

Source: the Committee on Statistics of the RK Ministry of National Economy

Export and import of mining and metallurgical products

In 2017 there was a significant growth of exports for all major products. Mining and metallurgy supplied the export with its products in the amount of 12.1 billion USD. In natural terms, the export volume of separate kinds of mining and metallurgy products has increased, for example, copper concentrates – by 81.9%, chromium ores and concentrates – by 23.2%, ferroalloys – by 4.2%, coal – by 11.9% and flat section products – by 10.5%. 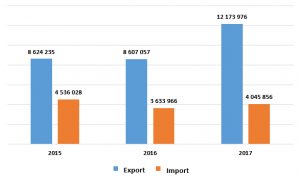 The export of mining and metallurgical  industries in 2017 compared to the same period of the previous year increased by 43% and amounted to 12,173.9 million USD. Export growth is connected with the increase of supplies for ferroalloys, refined copper, zinc, copper ores and concentrates. 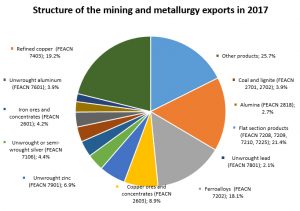 The import of mining and metallurgy products in 2017 compared to the same period of the previous year has increased by 10% and amounted to 4,045,857 million USD, which is associated with an increase in imports of flat section products, pipes and tubes of ferrous metals, lead ores and concentrates. 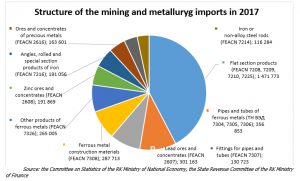 By the end of 2017, the volume of fixed capital investment in mining and metallurgy amounted to 624.1 billion tenge, which is 20% less than in the same period of the previous year. 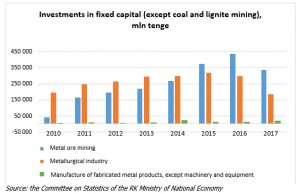 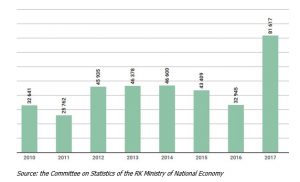 For example, the volume of investments in metal ore mining amounted to 337.7 billion tenge, which is by 25.6% less than in the same period of the previous year, however, the share of out-of-pocket investments by mining companies increased from 55.2% to 79.8%.

The volume of investments in the mining of coal and lignite accounts for 81.6 billion tenge, 165.9% more than in the same period of the previous year.

The volume of investments in metallurgical industry accounts for 185.6 billion tenge, which is 44.7 % lower than in the same period of the previous year, however, the share of out-of-pocket investments by enterprises, producing higher added value products, has increased from 45.1% to 87.4%.

It should also be noted that despite the small volume, the investments in manufacture of fabricated metal products, except machinery and equipment, reached 19.2 billion tenge, which is twice more than in the same period of the previous year.

Source: the Committee on Statistics of the RK Ministry of National Economy

Investments in fixed capital in the field of mining of coal and lignite, million tenge

More than 80% of uranium mining in Kazakhstan is carried out within joint ventures of Kazatomprom NAC JSC with global companies. Its key mining partners include such global players as French Areva, Canadian Cameco, Russian UraniumOne and Chinese CGNPC. The share of Kazatomprom NAC JSC in the total production by all enterprises of Kazakhstan in 2017 reached approx. 52%.

The main producing enterprises of the nuclear industry are located in Kyzylorda and South Kazakhstan Oblasts, which have the main explored reserves and uranium-ore provinces of Kazakhstan.

In 2017, the volume of uranium mining amounted to 23.4 thousand tonnes. According to this indicator, Kazakhstan ranks first in the world.

[1]The mining and metallurgical complex includes such activities as mining of metal ores, mining of coal and lignite, metallurgical industry and manufacture of fabricated metal products, except machinery and equipment